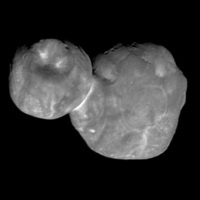 A Billion Miles Beyond Pluto: Exploring the Kuiper Belt with the New Horizons Spacecraft

Join Dr. Marc Buie and Dr. John Spencer, both from SWRI and members of the NASA New Horizons mission to Pluto and beyond, in a tour of the furthest reaches of the solar system. After flying by Pluto in 2015, the New Horizons spacecraft continued deeper into the Kuiper Belt, a vast swarm of small bodies orbiting the sun beyond the orbit of Neptune. On New Year's Day 2019, New Horizons flew close to one of these objects, a 20-mile long pristine leftover from the solar system's formation. This object, nicknamed Ultima Thule, turned out to be unlike anything previously seen in the solar system.

$10 for Adults and $7 for Students, Children, Seniors, and Military.