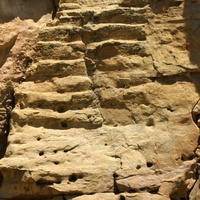 In this talk, Rob Weiner will discuss his recent fieldwork throughout the Chaco World, which combines LiDAR, drone aerial photography, and on-the-ground documentation to investigate the history, use, and meaning of monumental roads in Chacoan society. He will focus on new insights regarding the destinations of roads and ritual practices carried out on them, with particular attention to their role in perpetuating inequality. Insights from collaboration with the Navajo Nation and comparative examples of ritual pathways from throughout the ancient world offer new understandings of the role of linear earthwork features in the ancient Southwest.

About the speaker: Rob Weiner is a Ph.D. candidate at CU Boulder, a Research Fellow with the Solstice Project, and Staff Archaeologist for Cottonwood Gulch Expeditions. His research focuses on Chaco Canyon, with particular emphasis on monumental roads, religion, gambling, and Navajo oral traditions. Rob earned a BA and MA from Brown University, and he has conducted fieldwork in all Four Corners states as well as Turkey. His research has been published in numerous journals and edited volumes, including a 2018 article in American Antiquity.