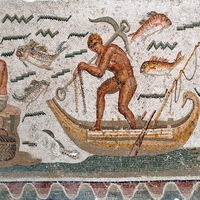 AIA Lecture. Tales from Under the Mediterranean Sea: Reminiscences of a Maritime Archaeologist

The lecture presented by Dr. Robert Hohlfelder (Emeritus Professor, CU Boulder), will cover some of the most amazing discoveries of his long career including: A Treasure Trove of 4th Century CE Glass Panels Found in the Sea, Pixie Dust and Roman Imperial Maritime Infrastructure, The Amazing Levitating Roman Amphoras, Two Harrowing Episodes 1,000 feet Below Sea Level, and his "most dangerous" moment.

About the speaker:  Dr. Robert Hohlfelder is an emeritus professor in the Department of History, University of Colorado Boulder and currently a Visiting Research Scholar at Wolfson College, University of Oxford. His areas of specialization are maritime history and the archaeology of the Classical world (late Roman history, and numismatics). He was taken part in, or directed, over 40 maritime archaeological expeditions in the Mediterranean. His most recent of his extensive publications is “The Maritime World of Ancient Rome” (2008).

This event will be held in-person in Hale Sciences #270 and via Zoom. Register today!