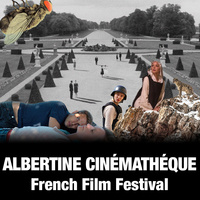 Designed to expand access to French cinema and support film programming at American colleges and universities, Albertine Cinémathèque’s annual film selection engages with the greatest issues of our time, while nurturing an enduring love for this diverse and evolving art form.

The festival will showcase a different French film every night to highlight the diverse and engaging range these films offer.

MANDIBLES, Tues 11/29 at 7:30pm - When Manu (Grégoire Ludig) and Jean-Gab (David Marsais) discover a housefly the size of a small footstool in the trunk of a car they just stole, they're surprised, but not for the reasons one might expect. They bluster around in dismay, saying, "Why is this in the back of the car? This screws up our plans! What do we do now?" What they don't do is ask the most obvious question: "How on earth did a fly get this big?" Manu and Jean-Gab take at face value the most extraordinary things, and get discombobulated by the everyday. They are not the brightest bulbs is the kindest way to put it. "Mandibles," the latest from French filmmaker Quentin Dupieux, takes as its premise an absurd situation and then treats it like a normal bump in the road. Manu and Jean-Gab's baffled yet incurious reaction to the fly is the first absurdity, and more and more follow in a farcical and ridiculous avalanche.

BENEDETTA, Wed 11/30 at 7:30pm - Benedetta Carlini was a real nun in the early 17th century in Pescia, a small village in Northern Italy. She reportedly had a relationship with one of her nuns while she was abbess of the Convent of the Mother of God, and she was stripped of her rank and imprisoned when the Papacy found out about it. She also reported having visions and even received the stigmata. In 1619, she claimed to have been visited by Jesus himself, who told Benedetta that she was to marry him. People started to question Benedetta’s proclamations, and the ensuing investigation revealed the forbidden relationship.

FRANCE, Thur 12/1 at 7:30pm - Léa Seydoux plays France de Meurs, a clout-chasing talk show host. France thinks she’s a journalist, but she’s really a vapid gadfly and a would-be demagogue. Writer/director Bruno Dumont (“Outside Satan,” “Joan of Arc”) can’t get enough of France, because she only thinks that she’s mastered a personality-driven system of faux-populist reporting that she’s really internalized and thus accepted at face value. Seydoux’s character struggles to change her self-image after she accidentally strikes a motorcyclist with her car. But France was probably already doomed by the time we met her.

BERGMAN ISLAND, Fri 12/2 at 7:30pm - Bergman Island finds Hansen-Løve in a characteristically reflective place, through the story of two filmmakers—one prominent, one less experienced but perceptibly promising—spending a lavish amount of time on the Fårö Island of the Baltic Sea, where Ingmar Bergman once lived, loved and made movies. Even though the good-humored proprietor giving the guest couple a walkthrough of their vacation home is quick to remind them that they are where Bergman once conceived “Scenes from a Marriage” and caused the divorce of millions of people, the place is certainly a retreat for Tony (Tim Roth) and Chris (Vicky Krieps), the latter being the less famous filmmaker of the two. After all, they are there to work, to soak in all the inspiration they can get and perhaps tour the island on an official “Bergman Safari.” (No, that’s not a joke. It’s a real thing that happens on this island.)

THE VELVET QUEEN, Sat 12/3 at 7:30pm - Marie Amiguet and Vincent Munier’s “The Velvet Queen” is a calming, meditative experience. You can feel the chill in the air when you’re watching it, and it often achieves a hypnotic tone, thanks in no small part to a gorgeous score from the two geniuses Nick Cave and Warren Ellis, who find the perfect compositions for a project that reaches for something greater than a typical nature documentary. “The Velvet Queen” is at its strongest when it allows for silence on this gorgeous landscape, using only its mesmerizing score to elevate the imagery into something poetic about the beauty of mother nature.

LAST YEAR AT MARIENBAD, Sun 12/4 at 2:00pm - It is possible, I realize, to grow impatient with “Last Year at Marienbad.” To find it affected and insufferable. It doesn't hurtle through its story like today's hits--it's not a narrative pinball machine. It is a deliberate, artificial artistic construction. I watched it with a pleasure so intense I was surprised. I knew to begin with there would be no solution. That the three characters would move forever through their dance of desire and denial, and that their clothing and the elegant architecture of the chateau was as real as the bedroom at the end of “2001: A Space Odyssey”--in other words, simply a setting in which human behavior could be observed.