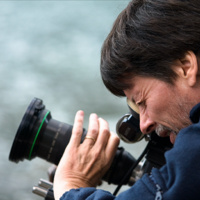 An Evening with Ken Burns

THIS EVENT IS SOLD OUT

An evening with the nation’s most influential documentary-maker, Ken Burns

Every year, the Center of the American West presents the Wallace Stegner Award to an individual who has made a sustained contribution to the cultural identity of the West through literature, art, history, lore or an understanding of the West. This year’s recipient is Ken Burns.

Burns' films have been honored with dozens of major awards, including fifteen Emmy Awards, two Grammy Awards and two Oscar nominations. In September 2008, at the News & Documentary Emmy Awards, Burns received a Lifetime Achievement Award from the Academy of Television Arts & Sciences. His work on the American West includes Lewis & Clark: The Journey of the Corps of Discovery, The National Parks: America’s Best Idea and The Dust Bowl.

Patty Limerick will interview Ken Burns, exploring the extraordinary public service he has provided his fellow citizens. In Limerick’s words, “by lending his own vitality and spirit to the people of the past, Ken Burns has brought history to life for millions of viewers, enhancing our understanding of the West and the nation in ways beyond measure.”