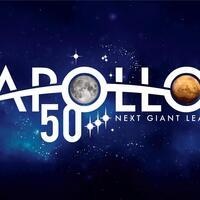 Join us for a month-long celebration as we take a trip back to 1969.

On September 12, 1962, President John F. Kennedy gave his iconic "We Choose to Go to the Moon" speech at Rice University. Several years and many missions later, the three man crew of Apollo 11 - Neil Armstrong, Edwin E. Aldrin Jr., and Michael Collins - embarked on a journey to the Moon. On July 20, 1969, they successfully completed the national goal of landing on the Moon and then returning safely to Earth.

We'll celebrate this amazing historical achievement through a series of talks, educational programs, new fulldome shows, musical performances, and more! As we take a look back, we'll also look forward to the next great leaps in our exploration of space.

Launch your adventure at Fiske and be a part of the worldwide celebration.