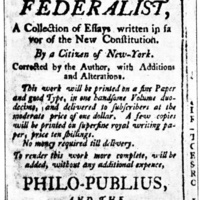 Arthur Milikh: Trump and the Founders on the Meaning of National Greatness

Over the past three years, President Trump has returned the phrase "national greatness" to our political lexicon and has thereby compelled Americans to reflect on its meaning. The best source for understanding the meaning of national greatness is The Federalist Papers. Its authors accurately laid out the logic by which a small, backwater confederation of our states would become the world's most powerful nation. Our task today is to understand the logic by which we became great and in what our greatness consists.

Featuring:
Arthur Milikh, Associate Director and Research Fellow, B. Kenneth Simon Center for Principles and Politics at the Heritage Foundation

Sponsored By:
Center for Western Civilization, Thought and Policy (CWCTP)

Free and Open to the Public