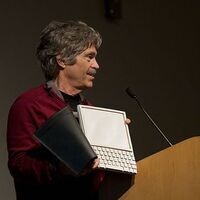 Looking wider and deeper, we can see that stovepiping disciplines and ideas keeps them from synergizing, and conversely—because most boundaries are almost arbitrary and for convenience—being able to merge and superpose great ideas will almost always be more fruitful. The catch is that only porridge will result unless the practitioners achieve high fluencies in all the disciplines they are trying to merge. Without this, often no more than gestures result. With it, many wonderful new ideas have been brought to light.

About the speaker:
CU Boulder alumnus Alan Kay is a computer scientist and winner of the 2003 Turing Award—the highest honour in computer science—for seminal work on object-oriented programming languages, including Smalltalk. Kay received a doctorate in computer science from the University of Utah in 1969. In 1972 he joined Xerox Corporation’s Palo Alto Research Center (PARC) and continued work on the first object-oriented programming language for educational applications. He contributed to the development of Ethernet, laser printing and client-server architecture. He left Xerox in 1983 to become a fellow at Apple. His graphical user interface for operating systems was used in Apple’s Mac OS and later in Microsoft Windows. He was a fellow at the Walt Disney Company (1996–2001) and the Hewlett-Packard Company (2002–05).