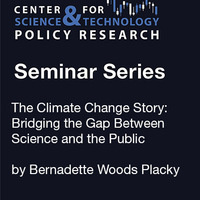 CSTPR Seminar: The Climate Change Story - Bridging the Gap Between Science and the Public

The Climate Change Story: Bridging the Gap Between Science and the Public

Bernadette Woods Placky is an Emmy Award winning meteorologist and director of Climate Central's Climate Matters program. In her role, Bernadette works with fellow meteorologists from across the country, providing resources and data on the connection between climate change and weather.

Before coming to Climate Central, Bernadette spent 10 years as a TV weather forecaster. Her most recent station was WJZ in Baltimore, where she earned an Emmy for Best Weathercaster.  Prior to that, she worked at both WLEX in Lexington, KY., and KNWA in Fayetteville, AR. Bernadette began her career at AccuWeather, Inc.

Bernadette is a proud Penn State University alumni where she is a steering committee member for MAPS (Meteorology Alumni of Penn State) and is a board member of Penn State's GEMS (Graduates of Earth and Mineral Science). She also carries both American Meteorological Society certifications — Television Seal of Approval and Certified Broadcast Meteorologist -- and is a member of numerous AMS committees (including Applied Climatology). Bernadette also serves on as a trustee at The Watershed Institute in central New Jersey.

free and open to the public