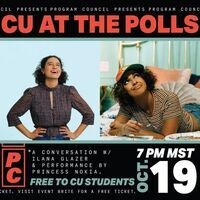 CU at the Polls

Program Council is proud to present our first event of the semester! CU at the Polls a conversation with Ilana Glazer & Performance by Princess Nokia.

The voter registration event will take place virtually on Oct. 19, 2020. The event will start at 7 p.m. MST. Admission is free for CU Boulder students; students reserving tickets to the event will receive a link via their email to access the event the morning of the show. (Please use your Colorado.edu email to ensure link access).

Ilana Glazer is best known for writing, directing, producing, and starring in Broad City, one of Comedy Central’s most popular shows. She was nominated twice for the Critics’ Choice Television Award for Best Actress in a Comedy Series for her role in Broad City. Glazer is also known for her role in Rough Night, a comedy film released in 2017. Ilana Glazer was born and raised in St. James, New York. Glazer began acting when she started taking classes at the Upright Citizens Brigade Theatre in 2006. From there, she began shooting Broad City as a web series with Abbi Jacobson before the show was purchased by FX for Comedy Central. Glazer’s most recent work is her debut stand up special The Planet is Burning, which was released on Amazon Prime in January 2020.

Destiny Nicole Frasqueri, more popularly known as Princess Nokia, is an alternative hip hop and R&B artist and songwriter. Princess Nokia is known for her hit songs “I Like Him” and “Tomboy”, from her albums Everything Sucks and 1992 Deluxe. Princess Nokia began creating music in 2010 under the name Wavy Spice. She released her first song “Destiny” on Soundcloud in 2010, as well as “Bitch I’m Posh”, which ended up going viral and amassing over 170,000 plays. Her two latest albums are Everything Sucks and Everything is Beautiful, which were both released in February of 2020.