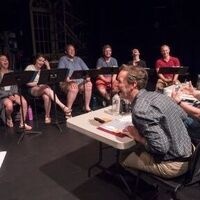 Composer and librettist Tom Cipullo, whose acclaimed Glory Denied is one of the most frequently produced 21st-century American operas, comes to CU NOW to workshop the comedy Hobson's Choice.

Based loosely on the classic 1915 play by Harold Brighouse, the opera follows Maggie Hobson as she insists on living her own life, despite the social conventions of the era—even if this means defying her autocratic, hard-drinking father, marrying a talented yet shy and illiterate bootmaker, and opening up her own business.