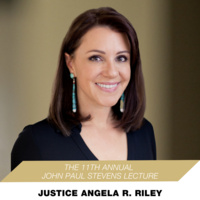 Join Colorado Law as Angela R. Riley, Chief Justice of the Supreme Court of the Citizen Potawatomi Nation of Oklahoma and professor of law at the University of California, Los Angeles, presents the 11th annual John Paul Stevens Lecture. The lecture is from 5:30-6:30 p.m. and the reception from 6:30-7:30 p.m.

An internationally esteemed jurist and scholar, Justice Riley became the youngest person and first woman to be elected as justice of the Supreme Court of the Citizen Potawatomi Nation of Oklahoma in 2003 and in 2010 was elected as Chief Justice. She is Special Advisor to the Chancellor on Native American and Indigenous Affairs and directs UCLA School of Law’s Native Nations Law and Policy Center, as well as the J.D./M.A. joint degree program in Law and American Indian Studies.

Justice Riley’s lecture will mark the first time that a justice of the high court of an Indigenous Nation has presented this prestigious lecture, and Colorado Law could not be more proud to welcome her.

One general CLE credit is pending for Colorado attorneys. (Colorado Law Students: This is a C.A.R.E. Pledge eligible event.)