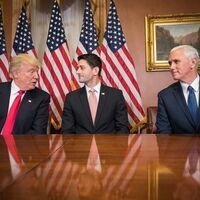 Francis H. Buckley: Conservatism in the Age of Trump

"With good reason, many of America's most prominent conservatives opposed Trump's nomination in 2016, and even his subsequent candidacy for the presidency. They sensed, correctly, that he represented a new kind of conservatism, one he called the 'Republican Workers Party.' In my talk, and in my new book, I'll describe how this differs from what went before."

Frank Buckley is a Foundation Professor at the Antonin Scalia Law School, George Mason University. He is a frequent media guest and has appeared on Morning Joe, CNN, Rush Limbaugh, C-SPAN’s Washington Journal, Newsmax, Radio France, the CBC, NPR, and many others.

He is a Senior Editor at The American Spectator, a columnist for the New York Post, and has written for the Wall Street Journal, USA Today, US News, National Review, the American Conservative, the New Criterion, Real Clear Politics, the National Post, the Telegraph, amongst many others.

His most recent books are The Way Back: Restoring the Promise of America(Encounter Books, April 2016); The Once and Future King (Encounter Books, 2015); The American Illness (ed., Yale 2013); Fair Governance (Oxford 2009); Just Exchange(Routledge 2005); The Morality of Laughter (Michigan 2003); and The Fall and Rise of Freedom of Contract (ed. Duke 1999). His current project is a book on corruption in America.

He has been a visiting fellow at the University of Chicago Law School, and has also taught at McGill Law School in Montreal, the Sorbonne (Paris II), and Sciences Po in Paris.

He is a citizen of Canada and also became an American citizen on Tax Day, April 15, 2014. He lives in Alexandria VA with his wife, Esther, two German Shepherds and two cats (the good one and the evil one). His daughter, Sarah, and her husband Nick Mark, are fellows at the University of Washington Medical Center.