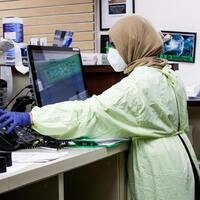 Abstract: How does the public react to information about the likely progression of COVID-19 cases in the United States? How do these reactions vary over the course of the pandemic and by partisanship, and with what consequences for policy attitudes and personal behavior? We argue that reading projections about the peak of COVID-19 cases in the United States is likely to lead to increased levels of anxiety and sadness. We expect that these effects will be more pronounced and less polarized along partisan lines earlier in the pandemic. Finally, we expect that elevated anxiety and sadness should in turn lead to greater support for protective policies to combat the pandemic and a greater inclination to engage in protective behaviors. To test these arguments, we fielded online survey experiments at three points in time (April, June, and August), in which respondents were randomly assigned to a control group or one of two projections about the likely progression of COVID-19 cases in the United States. Across all three waves, we find that exposure to information about case peaks increases anxiety, and to a lesser extent sadness, though the effects get weaker over time, particularly among Republicans. We also find that these elevated emotions increase support for protective policies and behavior.

Bio: I am a Professor and Vice-Chair in the Department of Political Science at the University of California, Riverside. My research focuses on how the political environment shapes public opinion and political behavior. I received my PhD in political science from Duke University. Prior to joining the University of California, Riverside, I served as Assistant Professor (2003-2009) and then Associate Professor of Political Science (2009-2015) at Claremont Graduate University. I am co-author of Democracy at Risk: How Terrorist Threats Affect the Public, published with the University of Chicago Press (2009), and Framing Immigrants: News Coverage, Public Opinion and Policy, published with the Russell Sage Foundation (2016). I am also co-editor of The Hillary Effect: Perspectives on Clinton’s Legacy (2020). My work has also appeared in journals such as Comparative Political Studies, Electoral Studies, the Journal of Politics, The Journal of Conflict Resolution, Perspectives on Politics, PNAS, Political Behavior, Political Research Quarterly, and Political Psychology. I have received support for some of this research from the National Science Foundation, the Russell Sage Foundation, and Time Sharing Experiments in the Social Sciences. I am director of the UCR Gender and Politics Lab, and served as field editor of American Political Behavior for the Journal of Politics from January, 2015-January, 2019.

Sponsored By: Program on International Development