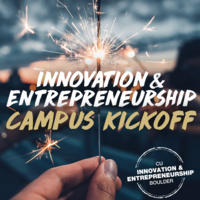 Get inspired at our I&E Campus Kickoff to learn about all the amazing entrepreneurial resources CU Boulder has to offer!

Want to turn your innovative ideas into impact?

CU Boulder alumnus Eric Stough (Film'95) is the Animation Director and Producer for Comedy Central’s hit animated show South Park. The animated series is in its 24th season and has won Stough five Emmy awards and the coveted Peabody Award. He began his career working for Denver’s Celluloid Studios working as a director’s assistant on national commercials.

He was the animation director for South Park: Bigger, Longer & Uncut and has worked with Trey Parker and Matt Stone on Orgazmo, Team America: World Police and the Broadway hit The Book of Mormon. He produced and directed animation for both South Park console games, The Stick of Truth (Published by Ubisoft in 2014) and The Fractured But Whole (Published by Ubisoft in 2017). He has recently finished work on South Park’s “South ParQ Vaccination Special” which was released on March 10, 2021.