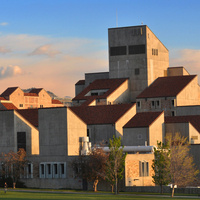 Aggregation-Diffusion Phenomena in Domains with Boundaries

This talk relates to a class of mathematical models for the collective behaviour of autonomous agents, or particles, in general spatial domains, where particles exhibit pair-wise interactions and may be subject to environmental forces. Such models have been shown to exhibit non-trivial behaviour due to interactions with the boundary of the domain. More specifically, when there is a boundary, it has been observed that the swarm of particles readily evolves into unstable states. Given this behaviour, we investigate the regularizing effect of adding noise to the system in the form of Brownian motion at the particle level, which produces linear diffusion in the continuum limit. To investigate the effect of linear diffusion and interactions with the boundary on swarm equilibria, we analyze critical points of the associated energy functional, establishing conditions under which global minimizers exist. Through this process we uncover a new metastability phenomenon which necessitates the use of external forces to confine the swarm. We then introduce numerical methods for computing critical points of the energy, along with examples to motivate further research. Finally, we consider the short-time dynamics of the stochastic particle system as the noise strength approaches zero.