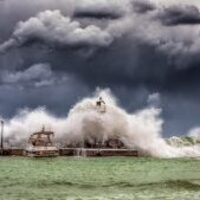 The lecture will be immediately followed by a reception at the Koenig Alumni Center. Please RSVP here. Or, attend via Zoom. Please email ibs-contact@colorado.edu for the password.

Abstract: Globally, one in ten persons live in low-lying areas proximate to the seacoast and thus at heightened risk of seaward hazards increasingly associated with climate change. Of even greater concern is that one in eight city-dwellers find themselves in this position. Where, in particular, and why? This talk will present an overview of ongoing research that describes 25 years of change in global population and urbanization at risk of seaward hazards, describing where and under what conditions that risk has been most pronounced. It will then showcase new research focusing on the United States examining an even longer time period, and describe who among us is more likely to be at risk. Spoiler alert: Populations living at risk of seaward hazards are far from randomly distributed, both globally and within the United States. Most notably, historically disadvantaged populations, urban dwellers, and those in deltaic regions are disproportionately vulnerable to the rising tide experienced throughout the world. Importantly, these populations at risk have been growing at a faster rate. This talk will speculate as to the reasons for these changes and this disproportionate vulnerability, and the implications for future growth and climate adaptation.

Bio: Deborah Balk is a Professor of Public Affairs in the Marxe School of Public and International Affairs at Baruch College and at the Graduate Center at the City University of New York and Director of the CUNY Institute of Demographic Research. She was a 2016 Andrew Carnegie Fellow.  She received her PhD in Demography from UC Berkeley and a Master’s in Public Policy from the University of Michigan.

Using a spatial demographic lens (combining population and remote-sensing data), she studies a wide range of demographic and health outcomes, poverty and vulnerability. She is a pioneer in the spatial modeling of urbanization, and was the lead developer of the Global Rural Urban Mapping Project (GRUMP) and co-developer of the first global Low Elevation Coastal Zone (LECZ) data sets, which allowed for the estimation of urban population at risk of climate-change hazards.