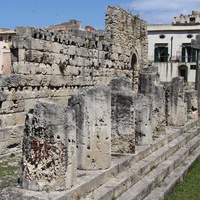 In this talk, Philip Sapirstein, University of Toronto,  presents a recent digital and architectural restudy of the temple of Apollo at Syracuse. Built in ca. 590 BCE, it was the first major Greek temple to be built entirely from stone, and thus it is fundamental to our understanding of the origins of Doric architecture. In addition to its architectural significance, the building has a monumental inscription, whose reading has been controversial since its 1864 discovery.

In 2018, Sapirstein created a 3D model, enhanced using new computational methods, which supports a new interpretation of this enigmatic inscription: as a celebration of an ancient technological breakthrough that transforms our understanding of this structure.

Join us live in Paleontology Hall or via Zoom!

About the speaker: Dr. Philip Sapirstein received his doctorate from Cornell University (2008) and is currently an Assistant Professor of Art History at the University of Toronto. His primary interests are the study of art and architecture in the ancient Mediterranean, in particular that of Greece, Rome, and the Near East, using digital techniques for 3D recording and analysis. Dr. Sapirstein has held numerous prestigious fellowships (from the NEH, ACLS, Mellon, and Fulbright Foundation, and the American School of Classical Studies in Athens) and has published widely on both the history and technology of Greek architecture and digital methodologies.