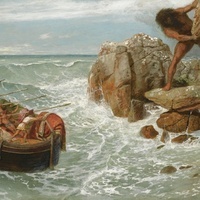 The Cyclops (best known for his encounter with Odysseus in Homer’s Odyssey) was a figure who captured the imaginations of authors and audiences in the classical world.

Reina E. Callier, lecturer and Latin Program Coordinator from the. classics department, will be giving a lecture that explores the Cyclops’ appearances in texts ranging from archaic Greece to the early Roman Empire, revealing the ways in which this monstrous character was adapted and interpreted by different authors for different purposes.

It will also be recorded and added to the Glenwood Springs library YouTube channel.

The event is sponsored in part by CU Boulder's Office for Outreach and Engagement.