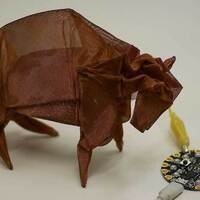 In this week-long Interactive Origami workshop, participants will create interactive systems using electronics and foldable structures. In addition to building their own DIY sensors and actuators, they will learn to connect physical origami and kirigami objects to computers in order to control simple animations and sound and also how to animate their physical creations with light and motion. The goals of this workshop are to get familiar with folding in the context of electronics and also to experience different techniques (conductive ink, led stickers, copper circuits) that are essential for interacting with these kinds of materials. At the end of the workshop, participants will exhibit their creations and show a live demo of their interactive works.

Who Should Take the Class?
The course is designed for anyone with interest in art, design, fabrication, coding, electronics, filmmaking, sculpture and making of all types. Students will learn novel design processes, build prototypes, create art and tell stories. Students will have many opportunities outside class meeting times to work with faculty and other students fabricating in the 24/7 open studio.

Enrollment: This workshop is open to anyone. CU Boulder students wanting to earn credit should email daniel.leithinger@colorado.edu for instructions.
Apply by Sunday, Nov. 3, 9 p.m.

Jean-Baptiste Labrune
Jb Labrune is a designer and researcher specializing in the development and study of creative processes in the context of new programmable materials, critical design and avant-garde places mixing artists, scientists and thinkers. His research focuses on the notion of “exaptation,” the way in which users of technologies reconfigure and hack them, producing original and unexpected functions and uses. He completed his PhD at INRIA and postdoc at MIT, then became a researcher at Bell Labs and interaction design professor at ENSAD (Arts Décos School). He then joined SciencesPo University as a lecturer while launching his practice at Radical Design Studio. He has organized many “hybrid” workshops in art and sciences venues around the world, including Arts Décos, Beaux-Arts, Palais de Tokyo, Mains d’Oeuvres, Mediamatic, Interaction Design Institute Ivréa, IMAL, Hangar, Hyperwerk, Akademie Schloss Solitude and MIT Medialab.

Bonnie Chernie
Bonnie Cherni is a local Boulder resident who founded Epic Origami. She engages a team of accomplished origami artists and innovative engineers to collaborate together to create fascinating origami exhibitions. Their mission is to raise awareness of endangered species with our animal and ocean sculptures while furthering Origami as an art form. Recent exhibitions include a 7.5 foot origami dragon install in front of Dairy Arts Center in Boulder (2019), a full gallery installation at the Denver International Airport (2018), Waimea Ocean Film festival (2015-2019), ‘lmiloa Astronomy Center (2015), Keck Observatory (2014), and Kahilu Theatre (2013). Epic Origami is known for their larger than life origami installations in tandem with innovative teaching workshops across a multitude of venues to attract and excite audiences. Epic Origami sculptures vary from miniature to life size and are often made of exotic mediums such as aluminum, copper, and canvas. Epic Origami has been featured in magazines such as Hawaiian Airlines/Hana Hou, Alaska Airlines/ Alaska Beyond, and Ke Ola Magazine.

Daniel Leithinger
Daniel Leithinger, assistant professor (ATLAS Institute & Computer Science) creates shape-changing human-computer interfaces that push digital information past the boundaries of flat displays, and into the real world. Motivated by the belief that computers must embrace the dexterity and expressiveness of the human body, his interfaces allow users to touch, grasp and deform data physically. Daniel received his PhD at the MIT Media Lab. His academic publications have been published at ACM UIST, TEI and CHI conferences, and he has received design awards from Fast Company, Red Dot and IDEA. Projects like “inFORM” have been exhibited at the Cooper Hewitt Design Museum, Ars Electronica Museum, and the Milan Design Week.

Documentation
Course material will be documented and shared in an open-source fashion and potentially considered for publication in relevant conferences.