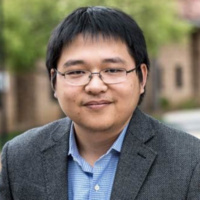 Understanding the mechanical behaviors of soft materials, especially those involving fracture and adhesion, is critical for evaluating the mechanical reliability of emerging applications such as soft robotics and biomedical implants. However, experimental characterization of the large deformation field in soft materials has been challenging. Although existing methods such as digital image correlation have been used to measure strain fields in soft materials, it remains a challenge to measure the nonlinear deformation field under large deformation. I will present an approach to map the large deformation field by optically tracking the displacements of randomly distributed tracer particles. The tracer particles serve to provide displacement data at discrete spatial locations without affecting the mechanical property of the underlying soft material sample. The discrete displacement data are further converted to continuous displacement and strain fields through an interpolation scheme. Using a soft silicone elastomer as a model system, we demonstrate that the particle tracking method is capable of resolving the highly concentrated nonlinear deformation field at the crack tip. We also apply the particle tracking method to characterize mixed‐mode crack propagation in an elastic elastomer and rate‐dependent crack propagation in a viscoelastic gel. Finally, we extend the particle tracking method to three‐dimension (3D) for mapping the 3D strain field within the volume of a soft gel substrate indented and sheared by a micro‐pillar.

Rong Long is currently an Associate Professor and Lyall Faculty Fellow in the Department of Mechanical Engineering at CU Boulder. Prior to joining CU in 2014, he was an Assistant Professor at University of Alberta in 2013‐2014, a Research Associate at University of Colorado in 2012, and a Postdoctoral Associate at Cornell University in 2011. He received his Ph.D. degree in Theoretical and Applied Mechanics from Cornell University in 2011 and his B.S. degree in the same field from University of Science and Technology of China in 2006. He received a few awards including the Young Adhesion Scientist Award (2014), the 3M non‐Tenured Faculty Award (2017), the NSF CAREER Award (2018) and the Provost’s Faculty Achievement Award (2020). His research interests include: continuum mechanics of soft materials, fracture mechanics, contact mechanics, adhesion and biomechanics.