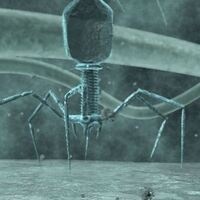 There is a war going on between humans and bacteria, and it looks like the bacteria are winning, until now. Scientists are now using bacteria's natural enemy to defeat antibiotic-resistant bacteria, or the superbug. Join us as we discuss the bacteriophage, humanity’s last and greatest hope in winning the war against the superbug.

$10 for Adults and $7 for Students, Children, and Seniors. CU Boulder Campus students are admitted FREE with valid & current student ID