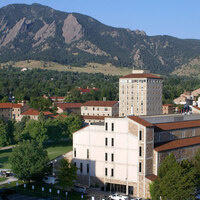 Abstract: Recent progress in creating graphene quantum dots (QDs) with fixed build-in potentials has offered a new platform to visualize and probe the confined electronic states. In this talk, I describe scanning tunneling spectroscopy measurements of the energy spectrum of graphene QDs as a function of energy, spatial position, and magnetic field. In zero field, the charge carriers are confined by oblique Klein scattering at the p-n junction boundary giving rise to a series of quasi-bound single particle states. Applying a weak magnetic field, we observe a giant and discontinuous change in the energy of time-reversed angular-momentum states, which manifests itself as the appearance of “new” resonances in the tunneling density of states. This behavior corresponds to the on/off switching of a π- Berry phase when a weak critical magnetic field is reached.  With increased applied magnetic field, the QD states can be confined even further as they condense into highly degenerate Landau levels providing the first spatial visualization of the interplay between spatial and magnetic confinement. This is observed as formation of the seminal wedding-cake structures of concentric compressible and incompressible density rings in strong magnetic fields.