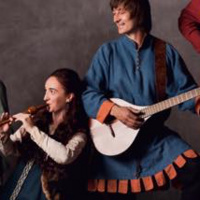 STARY OLSA is a medieval Belarusian music band from Minsk, Belarus. It was founded in 1999 by its present leader Zmicier Sasnoŭski and now consists of 6 musicians. It takes its name from an old brook in Belarus.

Besides its own  concerts, the band performs at mediaeval culture festivals, spear-runnings,  folklore and music festivals in Eastern and Western Europe, USA.

Stary Olsa’s aim is to not only introduce audiences to the beauty of the Belarusian culture and the richness of its age-old musical traditions, but also show how much it has in common with modern rock music as they bring living history to the stage!