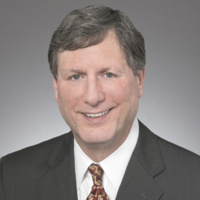 Dr. Cambone is the associate vice chancellor for cyber initiatives, The Texas A&M University System. At Texas A&M University, Dr. Cambone is responsible for developing a system-wide interdisciplinary cybersecurity program. In this role, he works with the academic and research professors and the Schools and Centers at the flagship campus, Texas A&M, and with several other universities within the A&M System, and state-wide agencies with cybersecurity responsibilities.

Dr. Cambone was appointed as the first Undersecretary of Defense for Intelligence (USDI), preceded by service in the Department of Defense as the director of the office for program analysis and evaluation, and as the principal deputy secretary of defense for policy. During his tenure in the Pentagon from 2001-2006, he was responsible, among other duties, for completing the 2001 QDR, reviewing the Department’s contingency and emergency war plans, developing the FY 2004 budget proposal and 2004-2009 FYDP. At UDSI he had oversight of the department’s intelligence policy, planning and budgets. He previously was responsible, as staff director, for the design and execution of two congressionally-mandated studies, one on the ballistic missile threat to the US, the other on the organization and management of the nation’s space capabilities.

Dr. Cambone has experience in business, including service as president of a $500 million business unit and as a board member for private-sector companies.

Dr. Cambone received his B.A. from The Catholic University of America and his M. A. and Ph.D. from Claremont Graduate School. He has taught as a senior fellow and adjunct at Villanova University and Johns Hopkins University, respectively.

The Benson Center promotes critical reflection on the distinctive traditions and political perspectives that characterize Western civilization. It encourages residents of Colorado and the United States to more fully understand and appreciate their past, their future and a free and creative American society within an international environment. Conservative Thought and Policy Guest Speakers bring a unique perspective as guests of the Visiting Scholar in Conservative Thought and Policy program. This year’s series, the “American National Character Project” expands on the Benson Center’s 2019-20 theme, American Identities. The series is sponsored by the Ryan Foundation.

The Founding generation recognized the importance of cultivating a national character, by which they meant the formation of “a people” dedicated to the principles of the American Revolution and the great experiment in self-government. Today, Americans are fragmented, disunited and unclear about what, if anything, they hold in common. The American National Character Project seeks to explore and identify principles and purposes that Americans do or might in the future share, and to discover how to provide a way forward for republican self-governance in America.