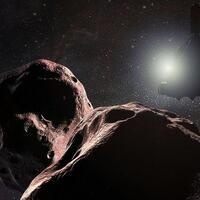 As with college and life, astronomy challenges us to better understand ourselves and our place in the universe. Fiske Planetarium Director, John Keller will lead a guided exploration of a handful of highly-collaborative cutting-edge research efforts exploring beyond the horizons of current understanding. Last year, the Laser Interferometer Gravitational-Wave Observatory (LIGO) opened a new era of multi-messenger astronomy. On January 1, 2019, the NASA New Horizons spacecraft will provide an ensemble flyby of a new world out beyond Pluto. In the early 2020s, the James Webb Space Telescope (JWST) will open significant horizons for understanding the early universe, other worlds, and much more. Together we will explore these and other horizons (both physical and philosophical) during this special Parent Weekend Public Talk at the Fiske full dome immersive theater.

$10 for Adults and $7 for Students, Children, and Seniors. CU Boulder Campus students are admitted FREE with valid & current student ID on 10/4