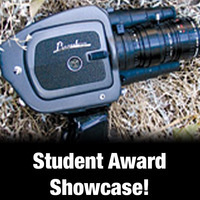 Come support the nominees of the Grillo Awards! Winners will be announced at the show.

There are the best of the best as voted by fellow students from each production course offering at the Department of Cinema Studies & Moving Image Arts.

Made possible with funds from the Arts and Cultural Enrichment Fee. Free admission. The Grillo awards are designed to encourage excellence in filmmaking and help defray some of the expenses required to pursue a degree in film production. A total of up to $17,000 of Grillo funds is distributed each year to four tiers of production students. Final recipients and individual award amounts will be determined each semester by in-class student votes and a panel of judges made up of CU Cinema Studies faculty and outside professionals. A selection of award-winning films will be shown one night only. The Grillo Awards are drawn from a University of Colorado Foundation fund set up in the early 1990s by Virgil Grillo (1938-1994), the founder and former Director of the CU Cinema Studies Program, whose dedication and vision helped shepherd Cinema Studies from its modest beginnings in the 1970s to an undergraduate program with some 600 students.