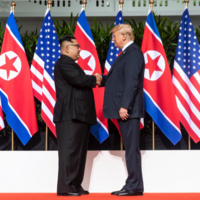 Trump and Kim Jong Un: What Next?

A lecture and discussion with Ambassador Joseph Yun.

As Special Envoy on North Korea from 2016 to 2018, Ambassador Yun led the State Department’s efforts to align regional powers behind a united policy to denuclearize North Korea. He was instrumental in reopening the “New York channel,” a direct communication line with officials from Pyongyang, through which he was able to secure the release of the American student, Otto Warmbier, who had been held in captivity for 15 months.

Ambassador Yun will discuss where we are currently in relationship to North Korea, and what might happen next.

Free and Open to the Public