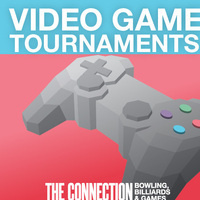 Are you a gamer? Want bragging rights? Here’s your chance! Join one of the Wednesday night video game tournaments hosted by The Connection!

Games are on PlayStation 4, XBOX ONE or Nintendo Switch gaming systems. Tournament formats are double elimination and/or round robin.